Skip to Content
Home Blog Things To Do 10 Beautiful Bridges In Paris, France That You Must Visit
by

There are 37 bridges over the Seine in Paris, and these structures are more than passageways for pedestrians and vehicles alike. Each with distinct architecture and design, these bridges also tell stories.

From the start of an architectural renaissance to battles won and alliances forged, a walk on these bridges is a walk through the city’s colorful history.

If you’re heading to Paris soon, take time to explore the bridges. Here’s a list of the most beautiful bridges in Paris for you to discover.

10 Beautiful Bridges In Paris, France That You Must Visit

The Alexander III bridge was built to honor the alliance between France and Russia and was opened in 1900.

It is regarded as one of the most beautiful historic bridges in Paris, with its elegant imperial design adorned with golden statues and its columns.

The bridge connects the Invalides on the left bank and the Grand Palais and Petit Palais on the right bank of the River Seine.

Situated just a few minutes away from Champs Elysées, the Alexander III bridge stands out with its beautiful Art Nouveau lamps. Ornate and extravagant, a walk here is one of the must do’s when in Paris. 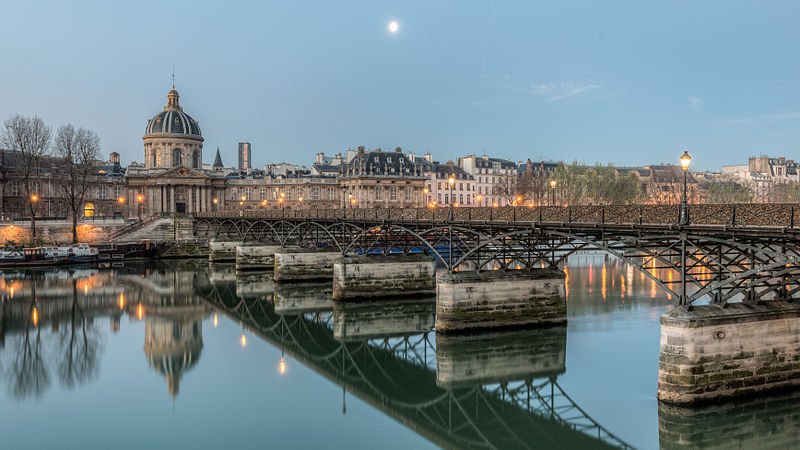 Famously known as “the love lock bridge in Paris”, le Pont des Arts remains to be one of the most famous bridges of Paris even if you will no longer find love locks here. It is one of the reasons why Paris is often called the City of Love.

This picturesque bridge was constructed in 1801 and connects the Institut de France and the central square (cour carrée) of the Louvre.

For years, it was the bridge where lovers attached locks to the railings until it was stopped in 2014.

There were hundreds of thousands of locks in the bridge which became increasingly dangerous to the structure. The city mayor encouraged couples to instead take selfies while in the bridge instead of locks.

In 2015, the old railings with locks were replaced with glass panels. These glass panels were then covered with cute and colorful art done by popular street artists.

Situated close to the base of the Eiffel Tower, Passerelle Debilly takes pride in its prime location. Built in 1899, this pedestrian bridge links the Quai de New York to the Quai Branly, which is close to the iconic Paris landmark.

This bridge is 125 meters long and known as a great spot for watching the sunset and taking photos of the Eiffel Tower.

However, what makes this bridge more popular was the fact that this was the meeting spot for East German spies after the fall of the Berlin Wall.

Pont au Double’s location over the Seine gives it some of the most breathtaking views of the majestic Notre-Dame Cathedral. This bridge links  Parvis du Notre Dame outside the cathedral to the Quai de Montebello on the left bank.

Built in 1883, Pont au Double is also known for superb views over the Ile de la Cité and the Latin Quarter.

This metallic arch bridge spans 45 meters and allows access to nearby cafes and the Shakespeare and Company bookshop.

Originally called Pont de Passy, this bridge was renamed in 1948 after the World War II Battle of Bir-Hakeim, between French and German forces.

The Pont de Bir-Hakeim has both a pedestrian path and a car path, with a Metro line above it. The bridge is best known for its incredible views of the Eiffel Tower, best seen from the footpath and the Line 6 Metro as it travels between stations.

Connected to the Île aux Cygnes (Island of the Swans) at its eastern end,  Pont de Bir-Hakeim was featured in films such as The Last Tango in Paris and Inception.

If you’re visiting this beautiful bridge in Paris, check out its many commemorative plaques and the five Statues of Liberty at the western end.

The picturesque Pont d’Iéna is another Parisian bridge that was named after a historic event, a battle won by Napoleon in 1807.

Also called Jena Bridge, it is located close to the Eiffel Tower and was once featured in an exciting scene in the James Bond film, A View To A Kill.

Pont d’Iéna is best known not for its location near iconic French landmarks but for its historic monuments.

The sides of the bridge are adorned with imperial eagles, while you’ll find four statues in its entryway. These statues are a Gallic warrior, a Roman warrior, a Greek warrior, and an Arab warrior.

As you make your way to the Jardin des Tuileries and the Louvre Museum, you’ll most likely pass by the Passerelle Leopold-Sedar-Senghor.

Don’t hurry, take your time, and admire views of the Seine from here. This curving bridge has a unique modern design that still used wooden planking.

Its unique architecture makes it one of the popular bridges in Paris for artists and photographers. The bridge also connects to the impressive Musée d’Orsay at the other end.

Walking along Passerelle Leopold-Sedar-Senghor is a great way to relax and take in the views between exploring the rest of Paris.

The 232-meter long Pont Neuf was constructed in 1578, during the time of Henry IV. It opened in 1604, which at the time signaled an architectural Renaissance in Paris.

It is the oldest bridge in Paris, yet its name translates to ‘new bridge’. It was called such to set it apart from older bridges that were lined with houses.

Today, it is regarded as one of the most beautiful bridges in Paris. The presence of grotesque masks sculpted onto its brackets adds a distinct character to this majestic old bridge over the Seine.

The Passerelle Simone-de-Beauvoir was opened in 2006, making it the youngest, yet already among the most beautiful bridges in Paris.  It is a  bridge that’s built especially for pedestrians and cyclists.

The bridge was named after French writer and philosopher Simone de Beauvoir. It spans 304 meters and links the 12th and 13th arrondissements of Paris.

This ultramodern bridge connects Bercy on the right bank and the thirteenth district around Tolbiac on the left, and.

If you’re headed to the François Mitterrand Library, the Passerelle Simone-de-Beauvoir provides a beautiful and scenic route.

Originally built as a wooden bridge in the early 1600s, Pont de la Tournelle went through many renovations and restorations.

Today, it is considered as one of the prettiest Paris Bridges, spanning 122 meters over the Seine.

Known for its impressive asymmetrical design, Pont de la Tournelle is adorned with a statue of Saint Genevieve, the patron saint of Paris.

The bridge is also known as one of the settings of popular 1990s TV series, Highlander.