Located on the Normandy Coast, the fortress island of Mont Saint-Michel is one of the most enchanting places in France. It seems to rise out of the sea during high tide, oftentimes surrounded by fog, which gives it a more mystical appearance.

A UNESCO World Heritage site, Mont Saint-Michel is more than its Gothic church and storybook charm.

There are plenty of other attractions and things to do in Mont Saint-Michel, and here’s a list to help you make the most of your visit to France.

11 Best Things To Do in Mont St. Michel, France

The Abbey of Mont Saint Michel is often mistaken for a castle because of its fairytale-like appearance. Built in the 8th century, the Abbey is situated on the highest part of the island following ancient beliefs.

Today, it is one of the most visited places in France. Its stunning Gothic architecture is a must-see up close, and the grand staircase that leads to the abbey is like walking up a magical castle.

There are daily services and live chamber music at the Abbey, which you might want to attend when you visit.

2. Walk on the Grand Rue 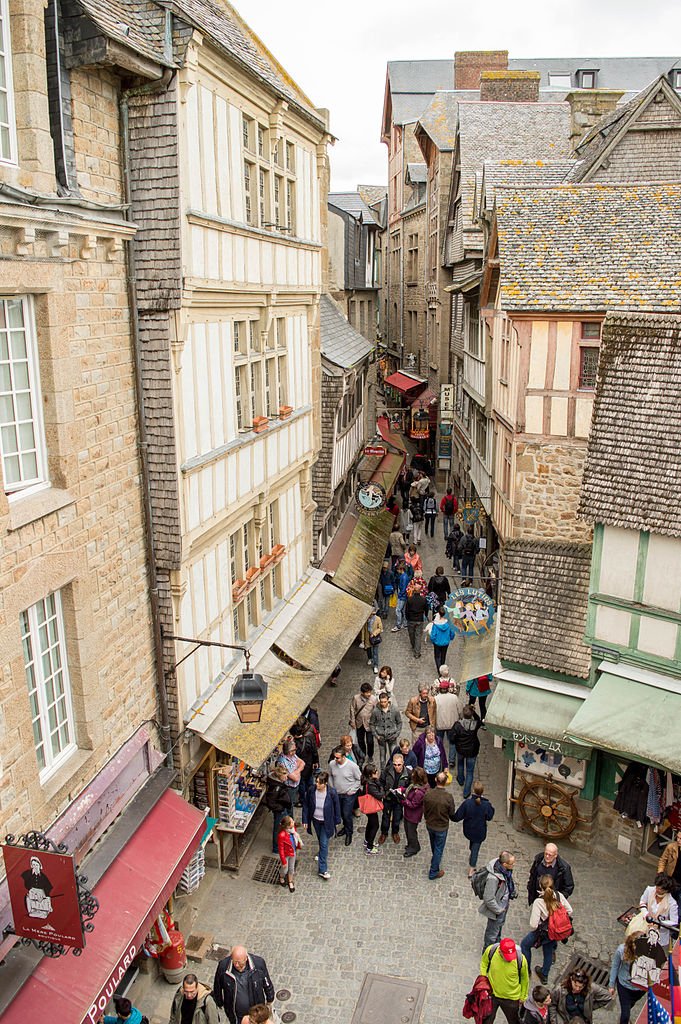 Lined with 15th and 16th century stone houses, the Grand Rue is one of the most popular places to visit in Mont Saint-Michel.

Visitors can access this charming street through the Burgher’s Guardroom, which houses the Tourist Office then the King’s gate. This busy street runs parallel with the ramparts and feels like a walk back in time.

The old stone houses are now occupied by cafes, restaurants, and shops but have kept their old-world charm.

3. Museum of History of Mont Saint-Michel

There is a museum in this island fortress and it is one of the best things to see in Mont Saint-Michel.

Aptly called the Museum of History, it is dedicated to Mont Saint-Michel’s intriguing history. There are wax figures that depict life in the Abbey, as well as when it was converted into a prison.

There are also objects on display here that were said to be used for torture centuries ago. Some of the exhibits are not for the weak of heart, but fascinating.

4. Walk along the Ramparts

A visit to the island of Mont Saint-Michel is like a trip back in time. Most of the structures here date back to the 13th to 16th centuries, and it has brilliantly kept its medieval charm.

The entire island is easily explored on foot, and one of the best things to see are its ramparts or ancient walls.

Walk along these cobbled paths and see the battlements used against invaders from centuries ago. From these ancient walls, visitors can also enjoy scenic views of the Bay of Saint-Michel.

Visiting a dam seems like a strange thing to do in Mont Saint-Michel.  However, Barrage Sur Le Couesnon serves more than its intended purpose.

For visitors to Mont Saint-Michel, this engineering marvel is a terrace where they can enjoy views of the island fortress. It is also a strategic spot for taking stunning photos of Mont Saint-Michel.

Barrage Sur Le Couesnon is an ideal place to hang out before or after exploring the island. The views from here are quite spectacular, and something that’s best captured on film and video as a souvenir.

If you visit this majestic island commune in July or September, check their tourist office for the schedule of pilgrimages.

The one held in July is a pilgrimage that takes you across the Bay of Saint-Michel. The September pilgrimage, meanwhile, is in honor of St. Michael.

These pilgrimages end with a solemn mass at the Abbey, and you get to see the village as you climb up the church.

If you are planning to visit, joining a pilgrimage is one of the best things to do in Mont Saint-Michel.

You cannot leave Mont Saint-Michel without visiting the iconic La Mère Poulard, or sampling their food.

This legendary place was established in 1888 by Annette and Victor Poulard. It started as a simple restaurant and is now one of the best attractions in Mont Saint-Michel.

Today, the  Auberge Mère Poulard is made up of a hotel, a restaurant, and a café.

Both the restaurant and café are a must-try if you want to enjoy a delicious meal in Mont Saint-Michel.

Speaking of having a meal in Mont Saint-Michel, there are a few French dishes that you simply must try while you’re here.

One of them is the “Omelet de la mère Poulard”, which is a specialty of La Mère Poulard restaurant, also served in their cafe. Another is the grilled  “Agneau de pre-salé” (lamb meat) which is also amazing as a casserole.

For a light meal, try the savory Breton galette (a buckwheat pancake) with your choice of cheese, egg, or ham filling.

Lastly, if you’re dining at La Mère Poulard, be sure to try their famous omelets. These are cooked on an open fire, a technique pioneered by the owner Annette Poulard herself.

After sampling their food, another thing to do in Mont Saint-Michel is to stock up on cookies. This is the closest thing to a souvenir that you can get from the island.

The Mont Saint-Michel butter cookies are crisp, sweet, and with a delightful creamy taste. They are sold in packages if you want to eat them right away and in souvenir tins, if you want to bring home some, or a lot.

You can find them in La Mere Poulard, another creation by one of its owners, Annette.

10. Walk the bay in the afternoon

Walking along the bay is one thing to do in Mont Saint-Michel that’s best done with a local guide.

In this activity, you get to know more about the island, share stories, and talk about the variations of the tide.

This afternoon walk lasts for an hour and a half, and you get to explore the bay at low tide. The bay will be muddy during this time so either be prepared to walk barefoot or wear slip-proof boots.

A tower in an enchanting island fortress, at sunset, sounds like a magical combination. This happens to be one of the best things to do in Mont Saint-Michel, where Tour du Nord is located.

Visitors can climb up this tower in the late afternoon and take in the views of the bay while waiting for the sunset.

The climb to the top of the tower is an experience in itself as you get to see parts of the island’s fortifications. Don’t miss this unique experience as you end your visit to Mont Saint-Michel.