Said to be an ode to Parisian architecture, the enchanting Palais Garnier is an important part of Paris’ ballet and classical music scene. Also called the Opera Garnier Paris or simply the Paris Opera, this cultural jewel has a history that’s as fascinating as the productions within its walls.

Home to the Paris Ballet, the Palais Garnier is regarded as one of the grandest and most prestigious opera houses in the world. And you must include it on your France bucket list. 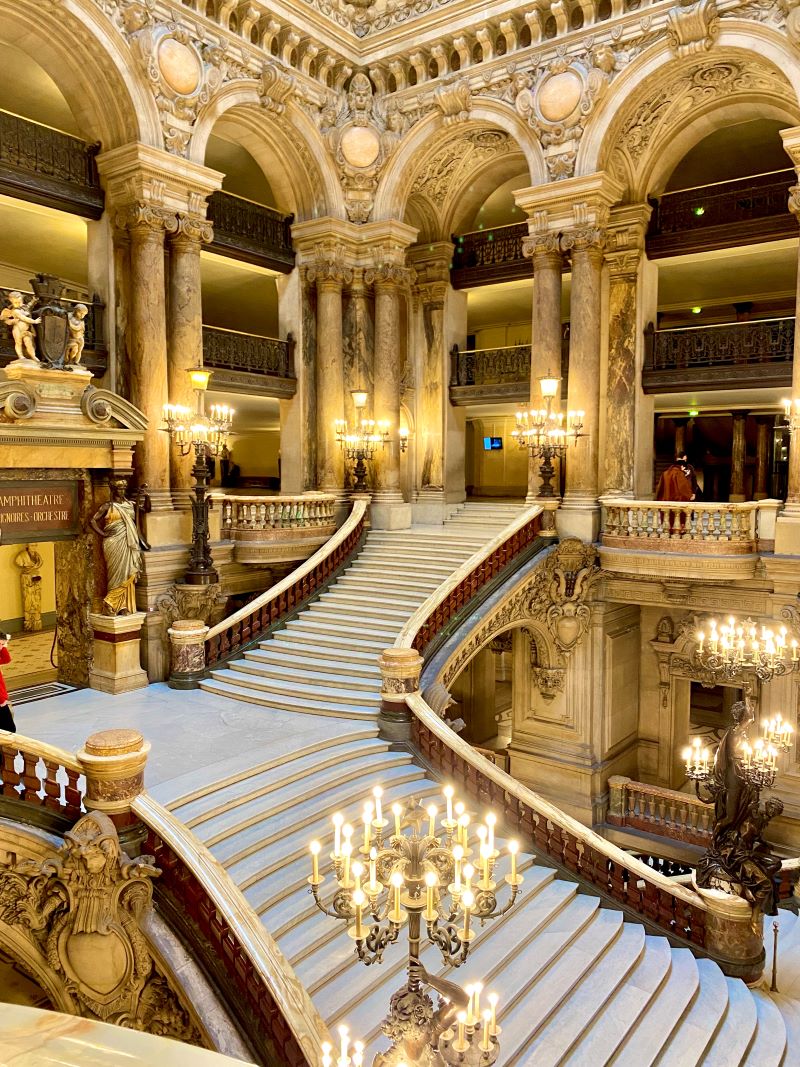 The exquisite Palais Garnier traces its history back to 1860. That was the time of Emperor Napoleon III, and there were plans to renovate and transform the city of Paris.

This plan was according to a design by civic planner Baron Haussmann. They organized a competition to encourage design proposals for the construction of Palais Garnier. They received a total of 171 proposals, including some from well-known architects at that time.

However, it was the proposal from then little-known 35-year-old architect Charles Garnier that got the green light for the construction of the Paris Opera House.

Garnier’s design was to build a spectacular structure that was in line with the bourgeoisie preferences of Napoleon III.

The Palais Garnier was intended to be a venue for the wealthy and powerful, where anyone with considerable influence and wealth would want to be seen. Garnier was given enough leeway to experiment with different architectural styles.

The result was a magnificent structure that was exclusive and luxurious. Back in the day, the rich people of Paris and nearby places go to the opera house not to enjoy performances, but to show off their wealth.

Years after its construction, the Palais Garnier became witness to war and conflict in France, such as the Franco-Prussian War and Siege of Paris, the fall of the Second Empire of France, and a fire in 1873.

The Palais Garnier was soon able to bounce back though and was inaugurated again in January 1875.

By this time, it was known as the biggest opera and theater house in the world. It retained its old grandeur, as a place for the rich and powerful, where people go to see and be seen.

Today, this iconic structure perfectly blends in with the innate elegance and beauty of Paris. Its intriguing and inspiring history adds to its magnificence and makes it a must-see Paris attraction.

The Palais Garnier pretty much represents how France braved its tumultuous history.

From conflict to revolution, from devastation and war, Palais Garnier and the rest of France was able to bounce back. Knowing all these makes a visit to this opera palace such an experience.

Why is the Palais Garnier famous?

Palais Garnier or the Opera House is one of the most iconic places in Paris. The opulence of the place symbolizes the grandeur of the French Second Empire.

The Palais Garnier also inspired and was the setting of the hit musical The Phantom of the Opera. Those who wish to walk in the footsteps of the Phantom can either join a private tour or use the audio guide.

Is Palais Garnier open to public?

Seeing an opera or ballet is still the best way to savor your time at Palais Garnier. However, if visiting during the day or pressed for time, you can enjoy some of its best features.

One of these is the grand staircase, which was the perfect stage for the Parisian elite of the 19th century who wanted to be seen. Thus intricately decorated double staircase leads to the foyer and other parts of the theater.

The auditorium and its ceiling is another stunning feature of Palais Garnier. Thus Italian inspired area seats 2,000 people, adorned with a beautiful chandelier and ceiling painted by Marc Chagall in the 1960s.

The Grand Foyer is a place where one should linger for at least several minutes. Its sheer elegance is a feast for the senses. Its walls and ceilings are adorned with gilt paintings and reflected by the many mirrors and glass windows.

If you want to take a breather from all that opulence, step into the balcony and take in the Paris street scene below.

Is the Palais Garnier free?

Entering the Palais Garnier is only free every first Sunday of the month. However, if you can’t wait for the free admission, you can still visit the opera but for a fee.

a. Self Guided Tour of the Opera Garnier

a. Guided Tour of the Opera Garnier

For guided tours, you can buy it online here.

You can visit the theatre every day from 10 am to 4:30 pm (10 am – 6:15 pm during the summer period) except for exceptional closures or opening times.